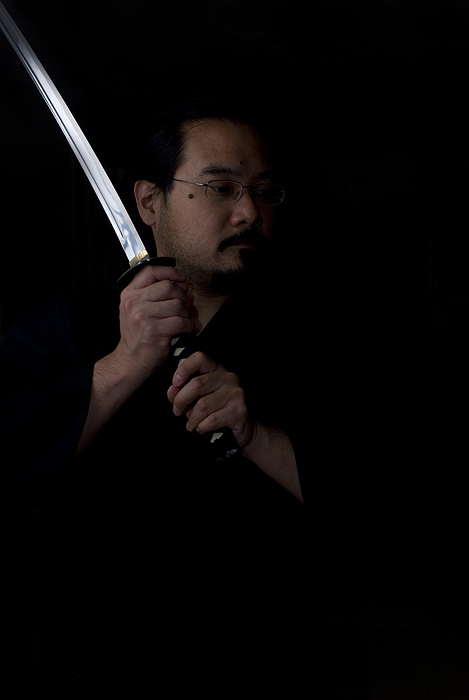 Ok, he is not really a Ninja. He is a friend of mine who practices the Japanese martial art called Iaidō in which people rehearse precisely-controlled smooth, fluid movements of the sword and the state of mind it takes to do this well. I thought it would be cool to capture him doing this in a photo.

And not "kiss" the word, but K.I.S.S. the acronym - as in "Keep It Simple, Stupid." This was the most important aspect in getting this shot to turn out the way we wanted it to. Our intention was to highlight the sword and more subtly his face. As he is also a photographer, I thought we could combine our equipment to really make this shot sing. After an hour of playing with up to 3 flashes at the same time firing from different directions triggered by a combination of infrared light and radio frequency transmitters but ending up with nothing close to what we wanted for a photo, we resorted to the K.I.S.S. philosophy.

We ditched one of the flashes and the RF transmitters. I brought the flash in a shoot-through umbrella up very close to the sword (he promised to try not to slice it up) to create a nice, smooth specular highlight in the surface of the sword. By choosing this particular stance (the position of the sword near his face), we were able to highlight the sword while still illuminating his face and hands. By cranking up the shutter speed (to 1/250th) and dropping the ISO (to 100), I took advantage of the short distance from the flash to him relative to the background (his busy kitchen, about 10 times further away) to drop the background exposure to black.