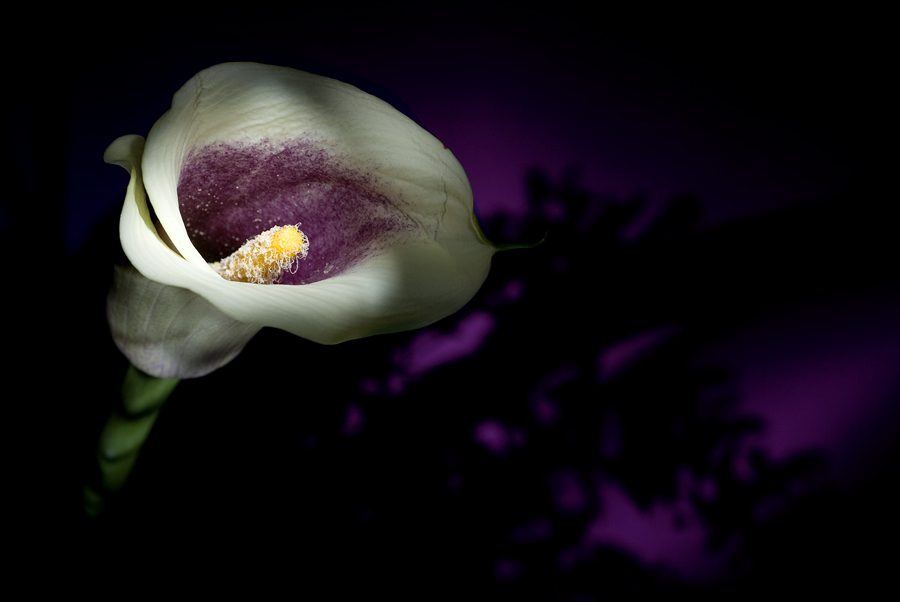 10 years ago I had just gotten married, had no idea how to make this kind of photo, and was listening to an album actually entitled Flower Power by Swedish progressive rock band The Flower Kings. Let's just say a lot has changed and leave it at that!

Fast-forward to present day, when I thought I'd grab a quick shot of the 10-year-anniversary bouquet. As a result of my hectic schedule, by the time I had a chance to pull out the camera, the entire bouquet was no longer exactly camera-ready, if you know what I mean. Plus I made a similar shot already, so I opted for a "detail" of just the best-looking (to me, anyway) one.

I thought it might look cool to selectively light a few small parts of it, leaving a lot of shadows. I also employed this little trick of using a "cookie" (not a real cookie, although...) to create some interesting light by firing the flash through something (like the plant's leaves) which allowed me to light he bottom of the flower & stem while casting some interesting shadows on them in the process. That gave me the idea to mimic the effect on the background, but in reverse - so I fired the flash (with a purple gel on it) directly on the background (black posterboard) so you can see the silhouette of the leaves, stems, and all that other gobblygook they put into the vase.

After 10 years, I even knew enough to ask for these kind of flowers (calla lily) by name. Now that is progress!!!