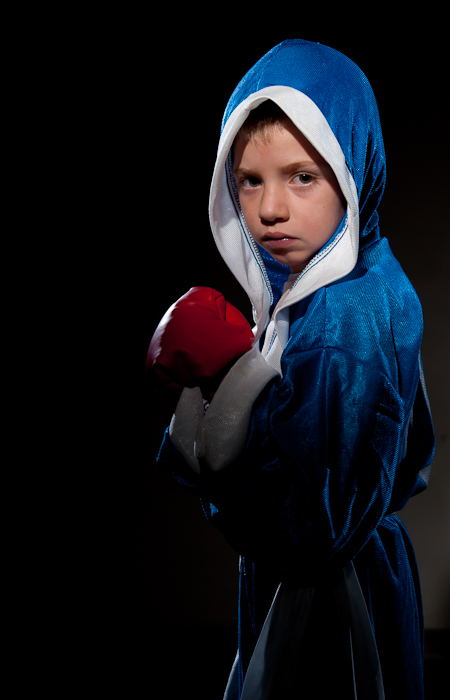 Picking up where this year's Halloween character series left off, we took the same triangle lighting setup (2 from the back, 1 from the front) and tweaked it a little. To get a much darker background, I swapped the front light modifier from the umbrella to a tightly-focused "grid" to keep the light on his face but off of the back wall. The 2 back lights are aimed back towards the camera which rims him out to separate him from the background. You can see the highlights from these lights on his red boxing glove and on the lower front & upper back of his robe - subtle, but they need to be there to pop him off the dark background.

Seeing how this one came out gave me an idea for another one of the characters too. It is starting to become clearer to me how ideas build upon each other to get to the look(s) I want in a photo.

It is ironic that "The Fighter" didn't put up the least bit of a battle when I asked him to get in front of the camera (if anything, he was fighting for more time there), while the adults who come off as friendly and open fight like mad to get out of having their picture taken. I don't get it but yes, I do take it personally ;)