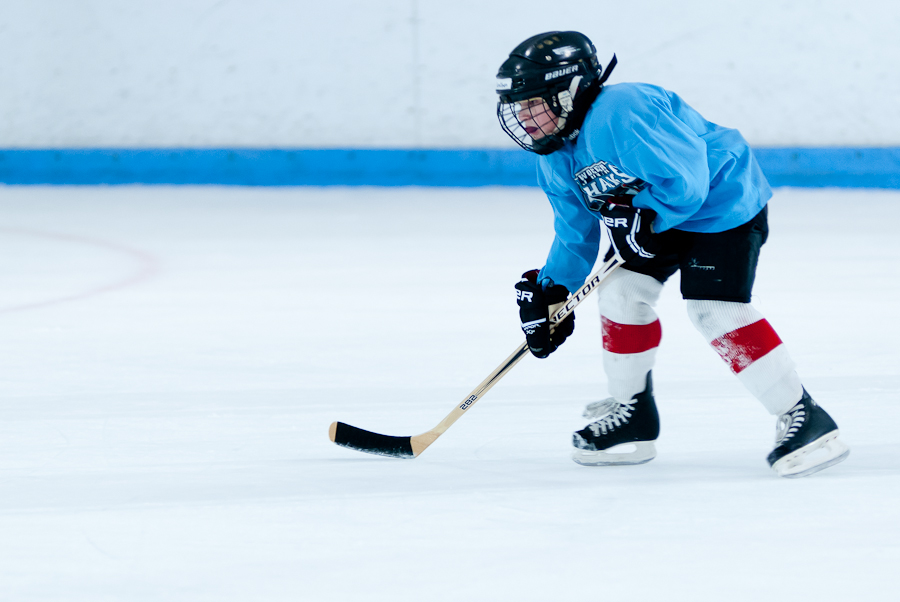 As a former (I can still skate, that's about it) hockey player, a (slowly) developing photographer, and a big fan of analogies (to the annoyance of most of my friends), I see a lot of parallels between learning photography and to play hockey. With each, I found I could be taught a little tidbit/skill/technique, then I would practice it to death, and slowly I would almost subconsciously start to incorporate it in with all the other stuff I'd learned.

After noticing that my little Speedlights (flashes) put out a lot of light for their size, I figured I might as well put that power to the test. Following the general Strobist strategy on how to light a basketball court with 2 small flashes (and studying the differences between various sizes of lights to light such a large area), I gave it a go: lighting a full-sized ice hockey rink during my son's first hockey camp, with 2 Speedlights.

99 Problems. Truth be told, I tried lighting this place once before and had all kinds of problems. While an ice hockey rink has a reflective surface (the ice) similar to the shiny, polished wood floor of a basketball court, the rink is surrounded by protective plexiglass which: a) limited my shooting position to near center ice, on the players bench (unless I shot through it, which killed over 1 stop of light and made my expensive lenses look like they were made by Fisher-Price) and b) reflected the light from my flash(es) back at the camera if I didn't watch the angles. Problems identified (until I managed to create a few more for myself), here is my thought process.

What's important. One good lesson I've learned is that every picture has one important aspect which determines how the exposure is set. In this case, shutter speed (to freeze moving skaters) was key. I needed it as fast as possible but still able to sync with the flashes, so on my camera that is 1/250th. That determined, rest was just "make it bright enough" so I set the aperture wide open (f/2.8) which was still was too dark, so I cranked the ISO up until it gave me light gray-ish looking ice (ISO 800), about 1-stop underexposed. 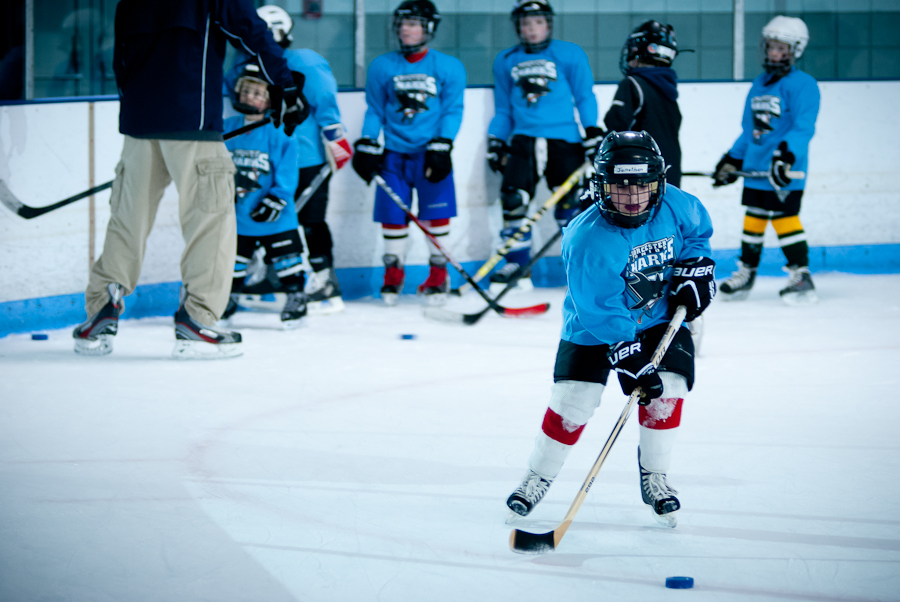 Bring the light. Crosslighting with two little Speedlights can't actually light a whole hockey rink (not while I'm drivin' anyway), but it can add some neat highlights from opposing directions for 2/3rds of the rink, which gives the skaters a more 3D look that I really have come to like and separates them from the background a bit. 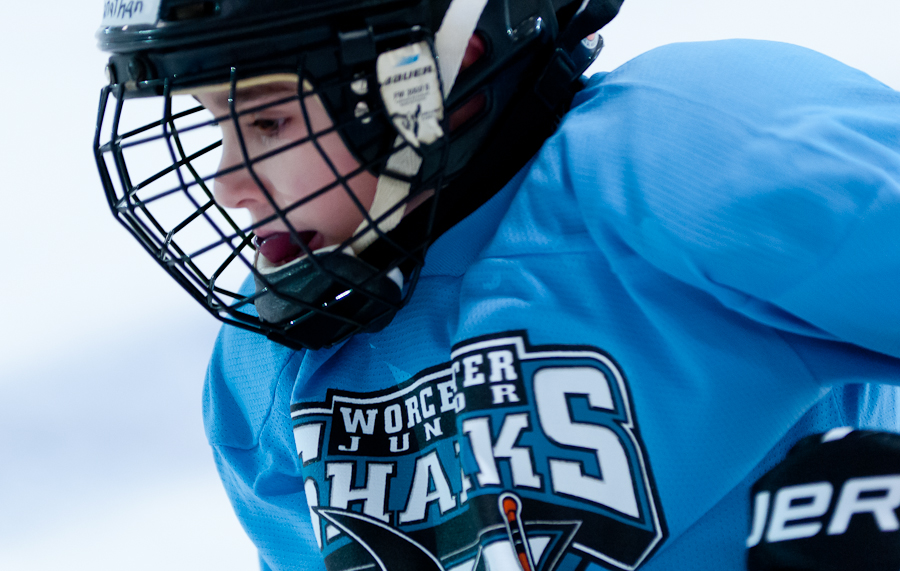 You can see the cool (to me) interplay on the back vs. front of his jersey. I love how the flash-lit back of his jersey transitions to the shadowed front part, which is only lit by the rink ambient lights, then the other flash takes over on his right (camera left) arm. That flash is even popping his face a little. 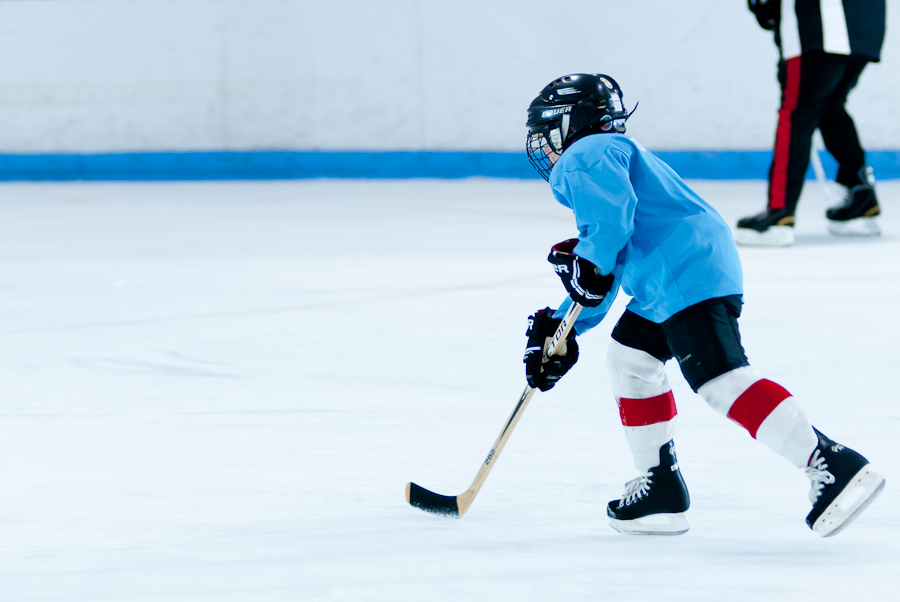 Finding balance. Keeping the flash exposure close to the ambient (~1-stop difference) and color-matching it (with green gels to match the fluorescent / sodium vapors in there) kept it looking realistic and minimized any distracting shadows created by the flashes. I shot from the bench (no plexiglass to shoot through) near center ice and had the flashes at my 2:00 and 8:00, with center ice being high noon. Getting the flashes far away from the skaters (I had them on the top row of the bleachers) and feathering them out into the rink evened out the light across the scene. 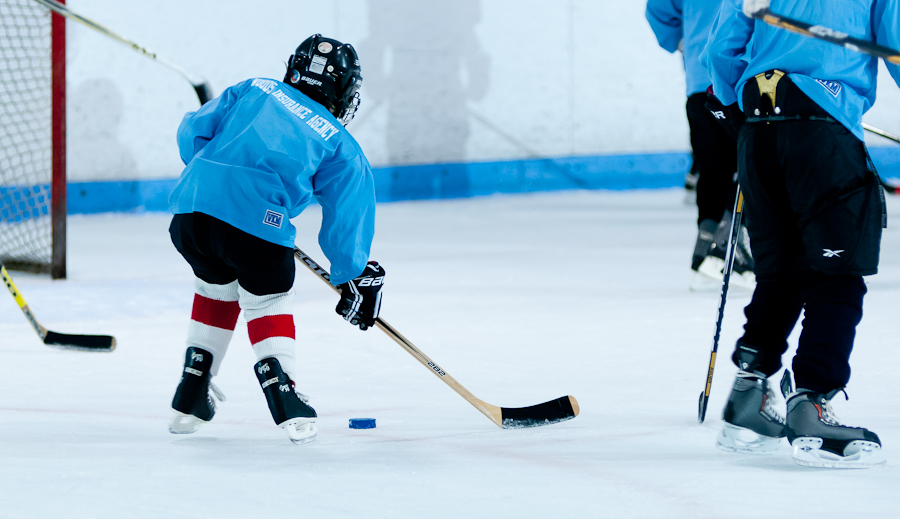 Lessons learned. There was a fine line between the nuanced, 3D-but-not-overlit look I wanted and the out-of-balance look when the flashes were too much brighter than the rink lighting. This was most obvious where you can see the distracting shadows (left) on the boards near the goal - that would be a big problem if this were an actual hockey game since that is where the action usually happens. Maybe I could minimize that by better aiming / feathering the flashes but it is a good learning moment to see the exposure difference - the shadows are how bright the ambient rink lighting (by itself) is. Amazingly, the flash creating those shadows is all the way out at the far blue line in the top of the stands!

Power problems. Surprisingly to me, despite the huge area, my guestimated power settings were actually too high. The flashes were too bright at 1/2 power (on the far flash - 2:00, 1/4 power on the near flash) to balance with the dim ambient light of the rink at the high shutter speed I wanted. I was running out of time to lug all around the rink to drop both flashes down in power, so I just shot with a slower than desired shutter (1/160th) to bring the ambient up to the level of the (brighter) flash. 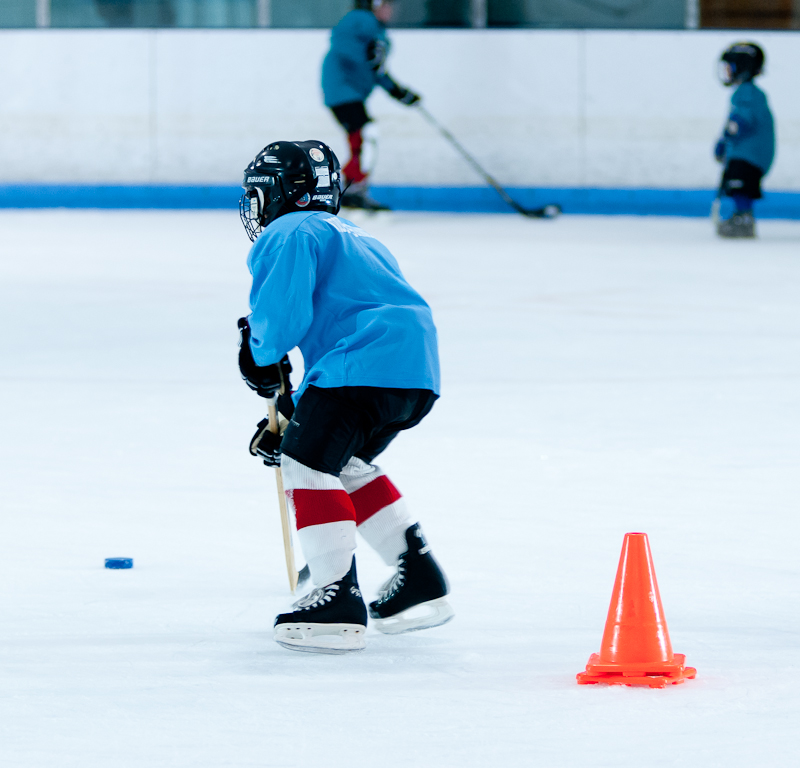 Being a thinking photographer, I figured, since he is just learning to put skating together with hockey skills, he wouldn't be moving too fast so I could get away with a slower shutter speed, but this caused a little (more) motion blur than I expected.

He's turning the corner, learning faster than I thought he would and really getting excited about it! Me on the other hand...