Luck of the halloween cow 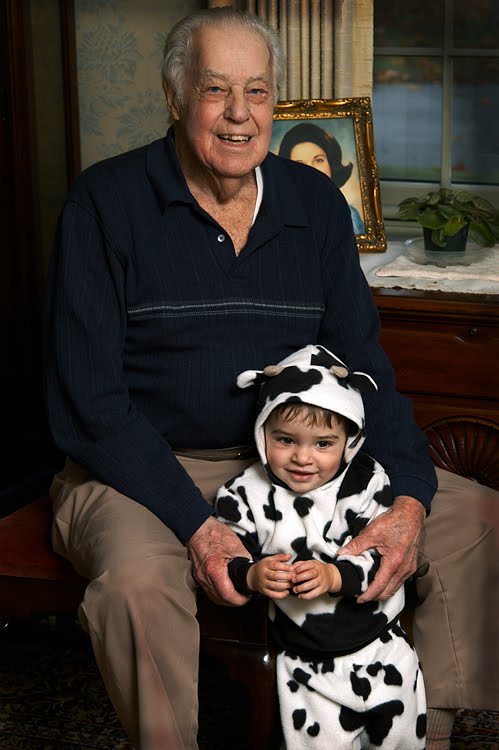 Sometimes you just get lucky --- plain and simple. This one photo involved a lot of luck on my part (all good) in both how it came out and how I can learn to make more photos like it in the future.

This was shot in 2006 (at Halloween, that should be the obvious part), shortly after I got my first flash which attaches to the top of the camera instead of that lousy pop-up thing that is built-in. I didn't really know how to use it other than I knew things looked better when I angled the flash up so it pointed both at the ceiling and towards the subject. I quickly aimed and pressed the button and got this... sort of.

What I didn't know then was at that time, a photographer for the Baltimore Sun named David Hobby was just beginning his blog-type website on the very subject of lighting a photograph with a basic flash (or two or three). Today that site, Strobist, has thousands of articles (and followers reading) about manually controlling every aspect of lighting as David describes it in exhilarating (to me, at least) detail. Those kinds of details are what I really wanted to learn about, I just didn't know it at the time. I knew I liked the way this photo came out and now realize it was largely the lighting (and the subjects) that made me like it.

I also tried my hand at something renowned photographer Ansel Adams used to preach: the photograph which came out of the camera was like a score in music --- just the basis for what would be the "final performance" which is how the finished photo came out after his hours of work in the darkroom. With digital photographs, the darkroom equivalent is in the post-processing done on a computer. This shot as you see it is a result of my attempts at using post-processing to emphasize or de-emphasize certain aspects in the photograph to my liking but I now realize that a lot of that could have been done (better) by lighting the scene the way I wanted it in the first place.

I can't wait to try out some of the cool concepts and ideas as I become a "Strobist" myself.