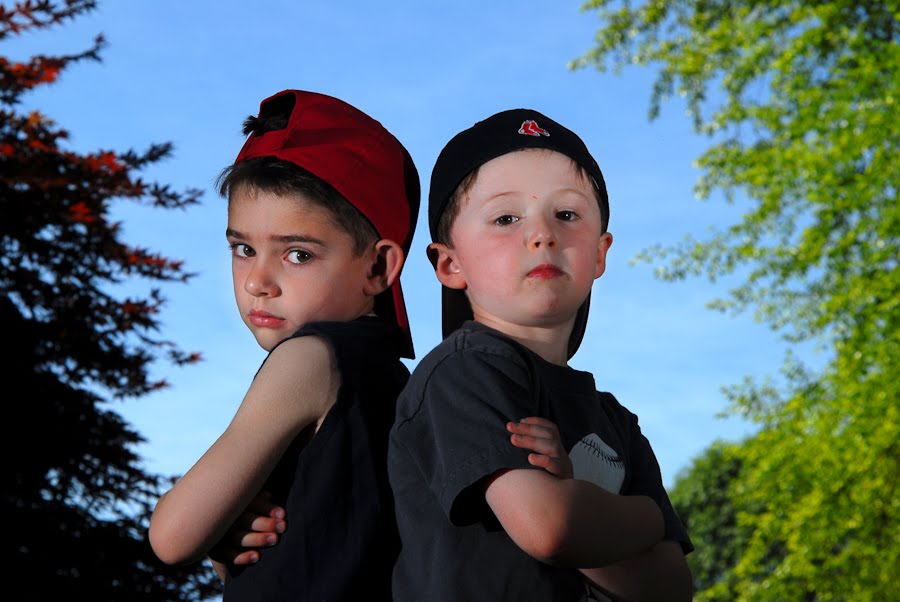 Whatcha' gonna do when they come for you?

Since the talent used in this shot was very busy, this was conceived, constructed, and shot very quickly (~5 minutes). I liked the backwards hat look they were both sporting and their response, when I told them I wanted to take their picture, was to ask if they could keep their hats on backwards, so I knew we were on the same page!

The exposure for this shot was based on the ambient, outdoor late morning sunlight. Since it was fairly bright, I dropped the exposure of the sky and trees by doing a few things in combination. First, I found a spot in the shade but with the blue sky in the background. Then I lowered the sensitivity of the camera's sensor as much as possible (to ISO 100), sped up the shutter as fast as possible for flash pictures (1/250th), and then stopped down the aperture until the background looked nice (f/11). Next, I called in the talent , and used two flashes, one to each side of the camera about head high (their heads) to light them.

I was going for that bigger-(and-badder)-than-life look, so I wanted to shoot from a low angle with the camera aimed up at them. This also cleaned up the background leaving just the sky and trees, which I used to frame them with. Due to their
current stature, I really needed to get the camera as low to the ground as possible but still be able to see through the viewfinder, so I ended up laying on my back looking over my head and shooting them with camera upside down (then flipping the picture back right-side up afterward).