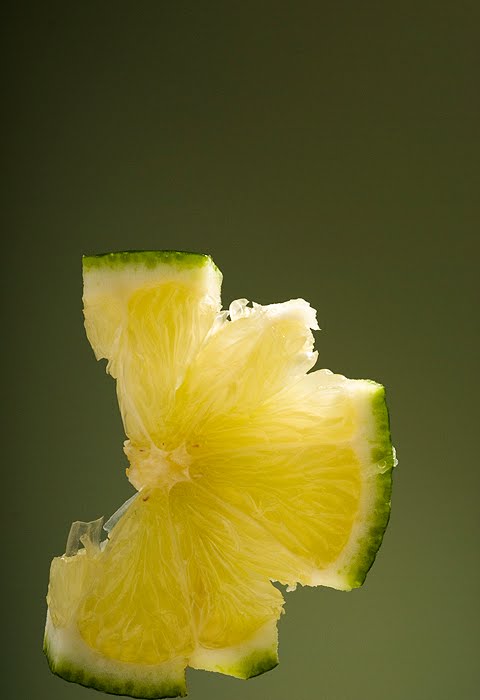 A very good friend of mine, Kevin, owns a successful web design company called Slice of Lime. He is also one of the most talented people I know and surrounds himself with other talented people, so I wasn't surprised to see how simple yet brilliant their company logo was.

At first it is obvious that a company called "Slice of Lime" would have a, well... slice of lime for their logo. But on further inspection, realize they are a (computer-based) web design company and that they seem to target up-and-coming small businesses which are largely run by up-and-coming young professionals who mostly grew up in the 80's. So in one small icon, the lime slice drawn in 1980's-era computer graphic style and standing up on edge says (to me at least) the name of the company, a hint about the industry they work in, and connects with people in their target demographic - all with one little image. Like I said, brilliant.

I thought it would be fun to make a real-life hommage to that logo out of an actual lime. I am certainly not going to win any fruit-carving competition in the near future, but then again I was doing this to practice photography and limes run away from cameras slower than kids (who run away from cameras slower than adults)... at least that explanation let's me sleep at night. 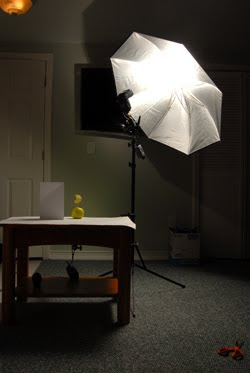 This shot was taken towards a wall in my basement with a 60mm macro lens at 1/250th at f/14 and ISO 100, which gave me the lack of ambient light that I wanted and enough depth of field to keep the width (front to back) of the slice in focus yet still allowed me to light it effectively with the flash. The background light (tinted green and diffused in all directions) was aimed at the wall behind and positioned so the gradient of the falloff would seal off the top of the photo. The lime was then lit with a flash/umbrella mostly from the back and camera right sides to give the lime that translucent look, then filled in on the bottom and camera left by bouncing light back with folded paper/posterboard fill cards.

The trick to getting the lime slice to stand up was to stick a toothpick in it, but then I needed something to hold the toothpick up with, so I stuck the other end in an apple (Granny Smith, of course, to keep with the color scheme ;) ). That rather ridiculous setup (pulled back setup shot to the left) prompted some interesting facial expressions from my wife!