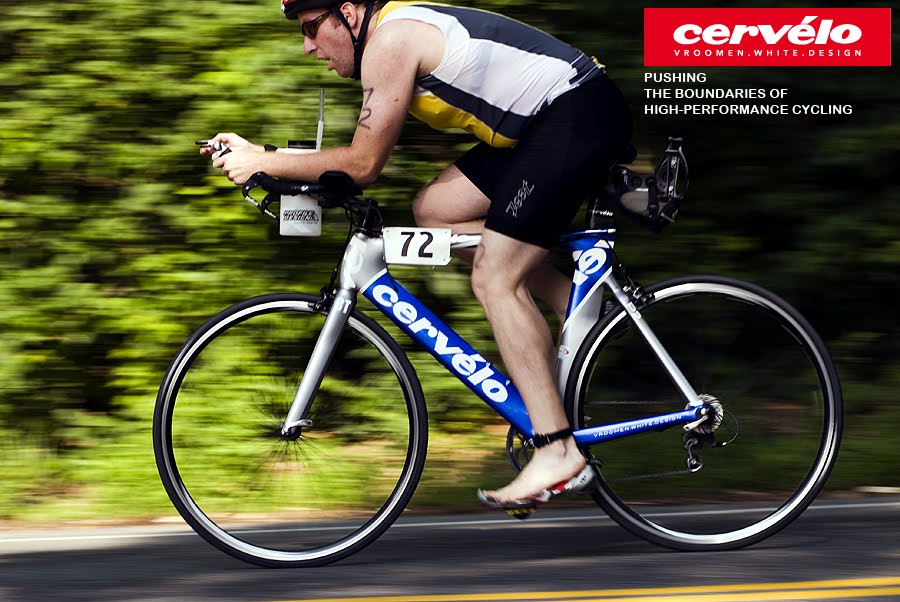 This shot was taken of a very good friend of mine, Chad, in a mini-triathlon. If you don't know what that is, I think it is some sort of modern-day torture treatment. With some tips about the layout of the course I received from his wife (because I was too lazy to look them up ahead of time), I staked out this spot where the background was a fairly simple wooded area between houses and driveways. I knew I wanted to try to capture the sense of speed, so I practiced on a few other riders to find a slow enough shutter speed to blur the background as I panned the camera with the rider, but fast enough that the bike and rider stayed sharply in focus for a hand-held shot. With that determined (1/125th), I dropped the exposure of the background by 1 stop (from f/4 to f/5.6) then lit up the rider with a restricted flash (in a snoot to keep it from lighting the road, trees, etc.) from camera left on the opposite side of the street from the riders.


I've been working on this technique of using a flash outdoors during the daytime (thanks for the feedback Colin) to create interesting shadows or focus your attention on a specific part of the photo but it is tricky to get right. Often the flash-lit part is too bright or too dim to be believable. This time, I think I got it (more) right. To me, he looks lit naturally by the sunlight filtering through the trees (before he gets to the bright unfiltered sunlight on the left half of the frame), but you can see how dark he really would have been without the flash by looking at the shadow on his right knee.


I was concentrating so hard on getting the panning thing down smoothly and snapping the picture right when he rode into the flash zone, that I cropped off the top part of his head (sorry Chad, it'll heal). The way it turned out with the focus of attention on the bike, I think it looks more like a bike advertisement than a shot of Chad. I'll let you know when I hear from Cervélo... ;)