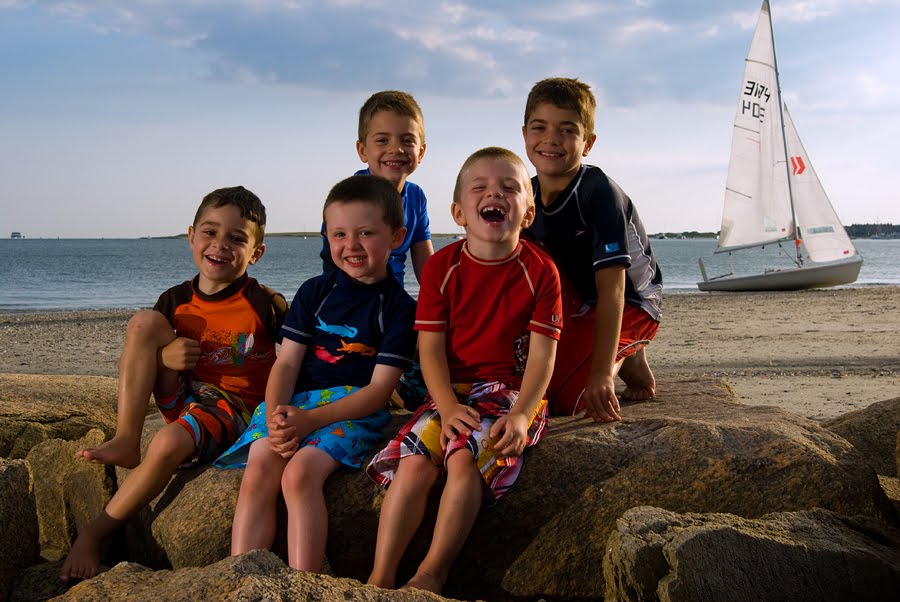 I grabbed minimal gear and headed out onto the beach to again try my hand at balancing a flash against bright late-afternoon sunlight. The basic setup, as described by Strobist David Hobby, is shown on the left. 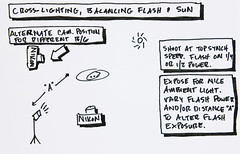 
By shooting at a ~45 degree angle (to the front light) along the imaginary line connecting the flash/subject/sun, the lighting also creates interesting shadows on the camera right side of their faces. I'm also starting to intuitively change the height of the camera, often to at or lower than the subject's eyes, which really gives a lot more impact to the photo - try that trick on your own, it doesn't cost a thing! The result is this kind of crisp 3-D image which is very close to what I was looking for. If I had had enough time to let the sun sink a little lower in the sky (and be less powerful) or if I had a bigger, brighter flash/strobe (or if I just moved the flash a little closer and aimed it higher), I could have made their faces a little brighter relative to the bright sunlit parts... next time (famous last words for me!).


I'm not sure what it means about me that I have a much easier time shooting photos of children than adults... probably that I'm just closer in maturity to them! I had just told them that they were doing great until the previous shot to this one, which may have broken my camera! That's what brought out the reactions captured in this shot.