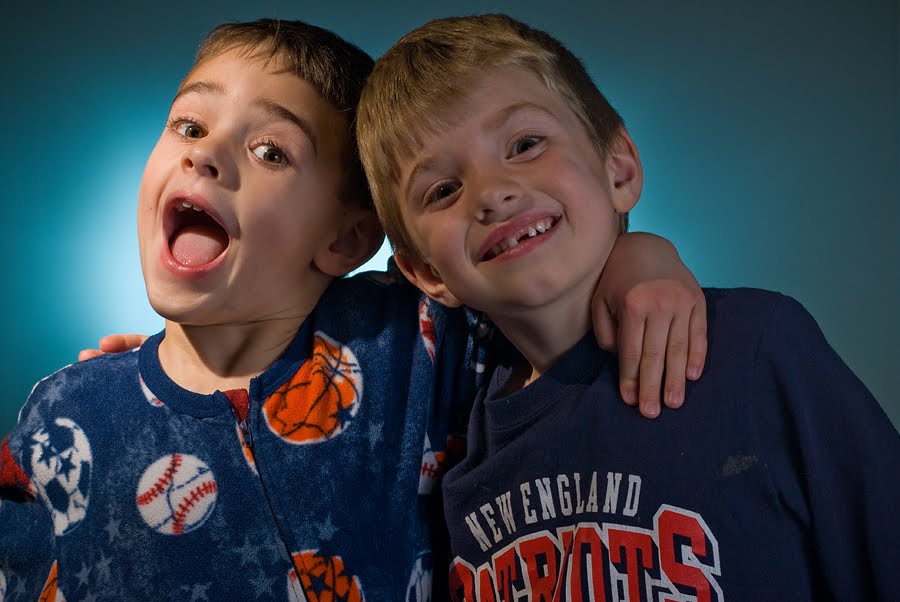 There are hundreds of ways to light a subject for a photograph. For the longest time, I never really knew about any of them. Then I learned the basics, which was eye-opening to say the least. But the "soft" light coming through a shoot-through umbrella starts to look the same in every picture once you see it. It is beautiful, flattering, soft light. I tried it, I liked it, it has it's place - but I wanted to try some more edgy styles to have some more options in the bag of tricks.


The idea here was to use a very focused, "hard" light as the brightest light in the photo (aka the "key" light) to grab and focus your attention - this is (quite obviously) coming from high, camera left. By itself, this would create very dark shadows on the camera right sides of their faces and look, well, pretty funky to put it nicely. I used a second light in the old shoot-through umbrella from slight camera right but turned way down in power (-2 stops and change) to "fill" in some of the dark shadows and smooth the transition of the other, harder light. The result of this "hard key / soft fill" lighting is the edgyness of a gangster head shot but controlled to the point that you can still see details in the shadows that would otherwise have been lost in blackness.


They actually moved from the position I wanted them in so one of them ended up lit to full exposure by the key light from camera left but is eating up most of the key light so that the other was missed by it almost entirely and is lit predominantly by the fill light in the umbrella. This wasn't the plan but the way it turned out with the crazy facial expression in the key-lit part makes it all the more funny and interesting to me, plus you can really see what each light source is adding to the photo.