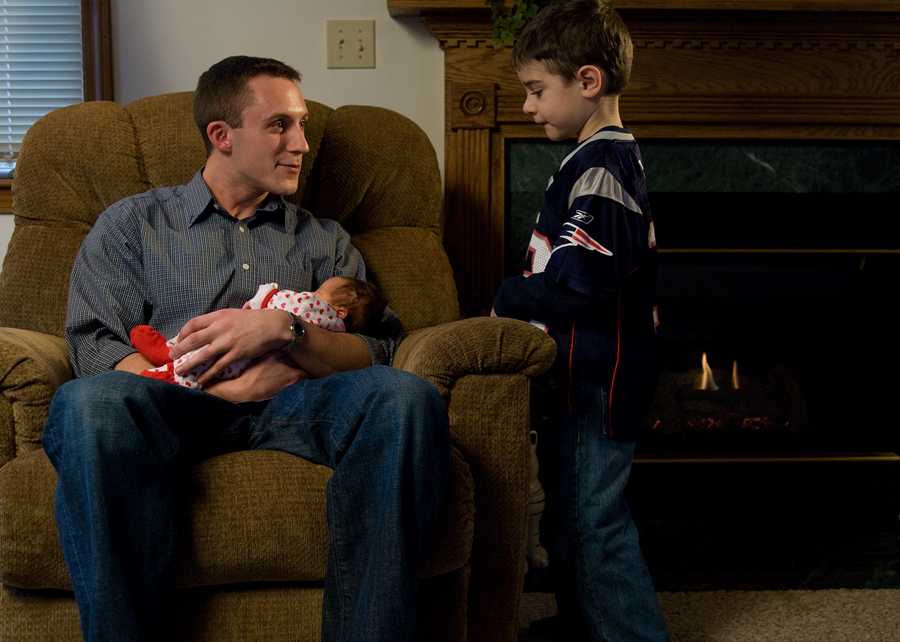 I remember it like it was yesterday. Waking up from my basement bedroom in the middle of the night, climbing the stairs half asleep to head toward the bathroom, only to find my Aunt quietly sitting in the chair by the fireplace. "What are you doing here?" I asked, to which she replied, "Your Mom and Dad went to the hospital to have the baby." That was the night my baby brother was born...

Twenty seven years, 3 nephews and 1 niece later, we have Uncle Greg. While I distinctly remember his birth day (night, actually), I don't know exactly when he went from being the little "toy" I played sock-hockey with growing up to the loving, caring Uncle that he is today... but I'm guessing it was somewhere in between learning to kick my behind at golf, skiing, or whatever other activity we happened to have in common. Whatever he was motivated to do, he learned to do it very well.

Speaking of motivation, that is what I was going for with this lighting setup - motivated lighting. As in, I wanted it to look like the scene was lit by the fireplace. Well, something like that... but this little fire-that-could was not bright enough to pull that off, so instead you get the tones, direction, and color of "fireplace" light, just a little unrealistically bright. The warmest, brightest light coming from the general direction of the fireplace and slightly cooler (but not much) dimmer "fill" light coming from the rest of the room. I dragged the shutter to include as much fire as I could but stopped at a point just before where the light coming through the blinds to camera left got too much for my liking. The composition of the frame still leaves something to be desired, but I'm happy with the lighting and I like the expression on his face.

As the "other" G. Love wrote in these song lyrics, he is my superhero brother.

Well it seems kinda hard But it really ain't nothin, All you gotta do is get bit By a spider or somethin, We could change the world In a week or a day And if you got problems Man I'll sweep them away, If you find yourself In a world full of trouble, Just call on G. Love, The superhero brother