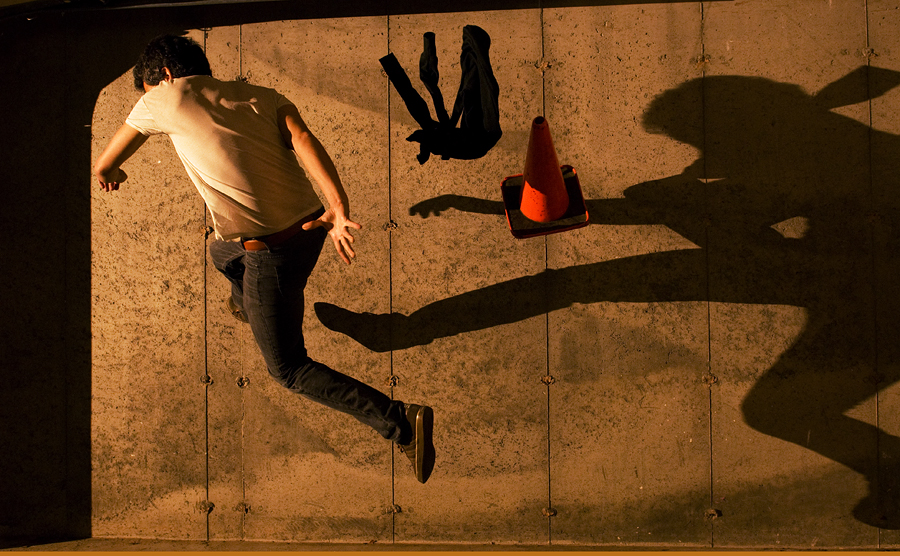 Happy Friday! This is a "happy friday' kind of photo. What do you see? Is this an overhead shot of someone running down the sidewalk at sunset? Could be, but something doesn't seem quite right (click on the photo to see it bigger)...

One of the most interesting things to me about photography is not it's use to document something exactly as it is occurring, but instead, to capture the essence of the scene or subject being photographed. More often than not, I find I am drawn to photos of something because the image conveys how it feels to be there looking at the scene in person, which is often different than a photocopy of it without any artistic interpretation, highlighting the important aspects and de-emphasizing the non-essential parts.

Sometimes these liberties are very subtle and almost subconsciously nudge the viewer's attention in a certain direction while other times, they smash you over the head saying "Hey, look at this!" It is all about altering the reality of the scene to make it (hopefully) more interesting - that aspect of photography interests me the most.

What started out as just me and Dave playing with shadows on a concrete wall, then traffic cones, and then the natural progression to fishing line (don't ask) led to this shot. By themselves, those things are not interesting.... at all actually. But together they (and we) created something that is not only a scene that didn't exist at the time (sunlight at close to midnight) but causes your brain to do a little backflip trying to figure out what is going on.

Hanging out with Dave pushes me to do things like this, off the beaten path... which is what makes him so cool; a scoop of chocolate walnut in a sea of vanilla!

A cool night in bean town

Digging through some 2013 photos, I found this set I took at an instructional nighttime photo walk around Boston I did near Christmas time. The walk was a very thoughtful birthday present from my sister and was led by a photographer from Remember Forever . Since this was a "beginner class" I wasn't sure how much I'd learn from the technical side, but I'm of the opinion that I can always learn something and when it comes to photography, it is pretty hard for me to not have fun. [Enjoying myself for 4 hours at windy, subzero temperatures was proof enough!] I concentrated on the toughest aspect for me (composition) while the instructor led us around to some pretty cool shooting locations. As it turns out I learned a LOT, mostly about things I never even considered. A lesson Joe McNally likes to pass along: "If you want to make more interesting photos, try putting your camera in front of more interesting things." This photo walk was case-in-point f