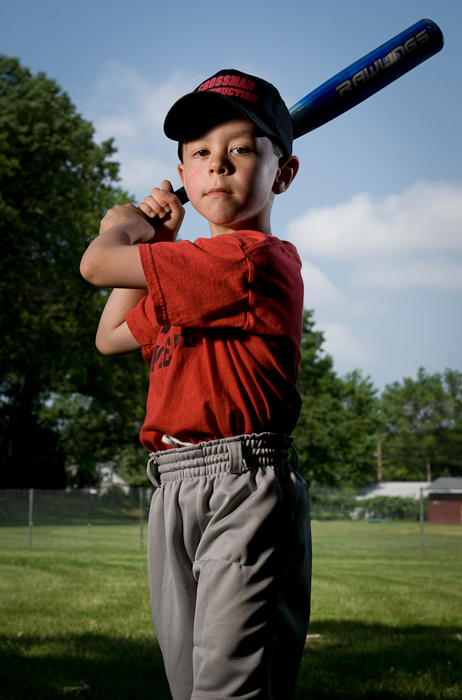 I am well aware that, yes, I may be in need of professional help... but that isn't what I mean. The 2011 little league baseball schedule had come to an end but there was an issue. There was a mix-up at the photo lab and the kid's baseball pictures ended up with the wrong child's name printed on them. Unsure if this was going to be remedied by the photographer (it later was), I shot some quick portraits of the kids at the field after their last game.

We had a blast shooting these and I even had a (way overqualified) assistant! Luca's (pictured here) dad is a professional freelance videographer who often shoots for some sports-oriented entertainment network known as ESPN(?). Dunno, never heard of it. Anyway, it was great having him there to help get the kids on their "spot" and fine tune the aim of that rim light which is making that little (but important) highlight on his camera right cheek which would have otherwise been lost in shadow.

I like how the "sandwich" lighting on him (front left & back right) gives him a very 3-D look that you can't really get otherwise. I could have done a better job hiding some junk in the background (a blue slide) behind him which I had to Photoshop out... I obviously just need some more help from the pros!