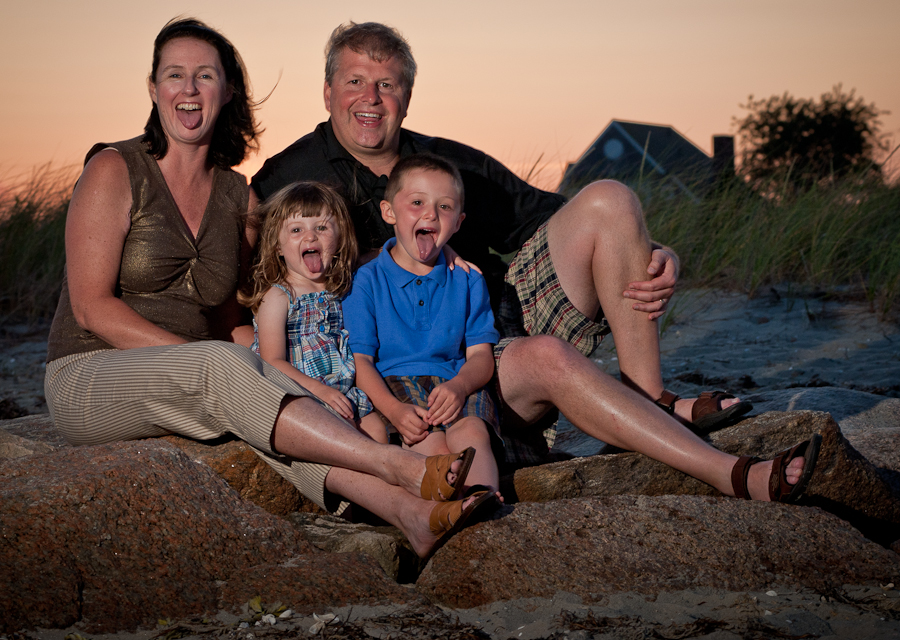 Imagining what learning to think like a photographer was like, I pictured planning a shot considering f-stops and shutter speeds... not "better wear my swim suit!" How the thought process ended up there goes something like this:

This was a planned shoot I did for my brother-in-law and his family in return for their donation to my charity of choice, to benefit the Dana-Farber Cancer Institute. We decided to take the photos on the beach... I knew I'd like to shoot some by the natural light of the late afternoon sun, then switch to shooting into the sunset and lighting them with flash... sunset-background meant pointing my camera west.... being on the east coast, that meant most likely toward land... which meant if I wanted a clean background, I'd either have to get very lucky to not have houses and powerlines in the scene or shoot upwards from a low position to get mostly sky in the background... but timing would have it close to high tide at sunset... so me being "low" and "east of them" would likely put me damn-near IN the ocean!

Guess what? I ended up laying in almost a foot of water to get this shot. Without thinking it through ahead of time, I would have been left with bad light or ugly background (or very wet clothes!). Thinking like a photographer isn't always (or even usually) glorious... but it does often yield better photos.

The best frames came immediately after this - but this was a favorite of mine because it tells the story of how we got the good ones. I'll let them pick and share their favorites.