Flashing in the woods Backlit photos, especially outdoorsey nature/landscape shots, are really interesting to me... despite my many, many horrible attempts to shoot them. There is an amazing sense of drama to an otherwise normal looking everyday scene that just sucks me in.

I had been noticing the way the afternoon sun backlights this little river for a while now and finally had the time to take a few shots of it. The biggest problem with photographing backlighting is well, all the light comes from the back! Goodbye foreground, hello big dark "holes" in my photo(s). 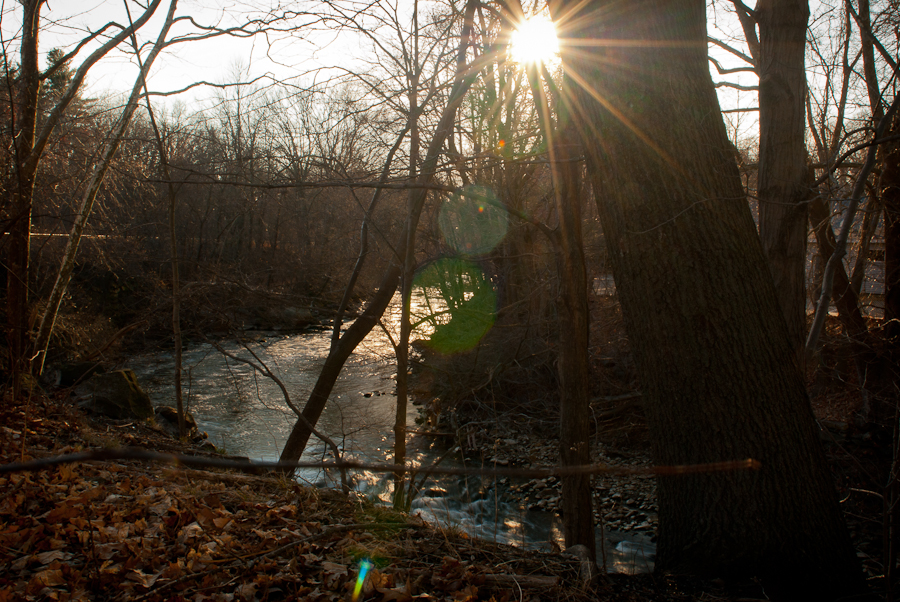 I liked the big tree on the right as something to look at in the foreground, but it was a big black crooked rectangle in the first few frames I shot (see the "ambient only" (i.e. no-flash) shot at left). But wait - aren't I learning how to light? (Too dark? Mongo turn on light!)

But I wasn't sure a flash would work here. It would have to have just the right color (which turned out to be a full cut of CTO gel), direction, and intensity to not look like a flash. And since I was trying to get a slow shutter speed to smooth out the flow of the water a bit, I had to "stop down" the aperture all the way to f/22 (ISO 100).

Question in my head: could a little battery-powered flash hit f/22 through a full CTO gel outdoors in broad daylight? That's like asking a guy with a BMX bike to race a Ferrari and win? As I discovered, the result is similar in both cases - if the distance is short enough, the answer is yes!

I stuck the flash just out of the frame (by inches) to camera left so it raked across the surface of the bark (to bring out some texture and so it wouldn't wrap too far around the front of the tree) and aimed it at the tree up near where the sun would be peaking past (for a little motivated lighting) and zoomed it all the way out to 105mm (for a nice falloff going down the tree). What do you know, the rectangle turned into a tree again - with bark and everything! It even kinda looks real... except real sunlight doesn't tend to go around a tree and light the dark side just enough for you to make out the details.

Compositionally, I tried not to over-complicate things in my brain (easy to do). I had a foreground subject (tree) and a background (river) - check. Next I tried to create some decent "lines" by tie-ing everything into/from the lower right corner of the frame and leading back to the sun (brightest part of the frame, where you are naturally drawn first): the biggest line (from the LR corner, up the tree) leads to the sun. The other line I was concerned about was the river, coming out of the same (lower right) corner and winding around, ending up leading your eye (hopefully) back to the sun instead of right out of the frame. A bonus was the top-of-the-trees line from the upper left corner, also leading towards the sun.

There are things about this shot that, composition-wise, kinda irk me (the dark tree in the middle of the frame, leaning towards the river: I like how it creates another line leading to the sun, but I don't like how it "crosses out" and covers up almost the entire river), but I learned a few things I'll take with me the next time I decide to go flashing in the woods.

Update: I added some thoughts on what I intended to do, compositionally, and a shot from the same angle but without the flash firing so you (ok, Corwyn) can see the difference. It is obvious which one I liked better, but what do you guys think - flash or no flash?