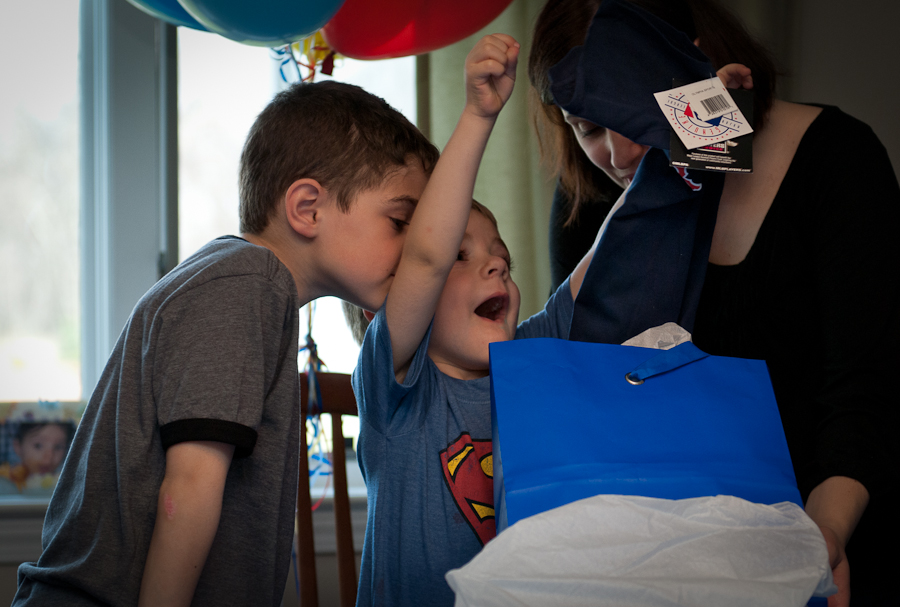 I went into snapping some shots of his 4th birthday party with the hope of stealing a couple candid moments for preservation, so I didn't want to lug out a lot of lighting gear and ruin the mood, but I really like the pop of a "lit" photo. And with the large windows backlighting the room (and preconceiving where I wanted to stick him to open his gifts and blow out candles), I knew I would need to add some light to the front of the frame, otherwise it would be silhouette-city.

My (hopefully) subtle middle-ground was to use an on-camera flash bounced into the ceiling to add light to the foreground and dial-in a slow-ish shutter speed to just about blow out the light coming through the windows. As I'm learning, as long as the subject is exposed reasonably, the exposure of the background can be, well, anywhere I want it to be: black, dark & contrasty, "normal", light & airy, or blown-out to Kingdom Come. With a flash, the choice is mine to make. Without a flash, there is precisely zero choice.

In retrospect, I should have slid over to my right a bit to clean up the background behind him a bit. Another for next time...

Even with the time-stopping magic of a photograph, I'm still not sure if he liked any of his gifts, including this Red Sox sweatshirt from his Uncle Greg & Becca. Maybe as he gets a little older, he will learn to be more outwardly expressive. At only 4, he has a long way to go. ;)