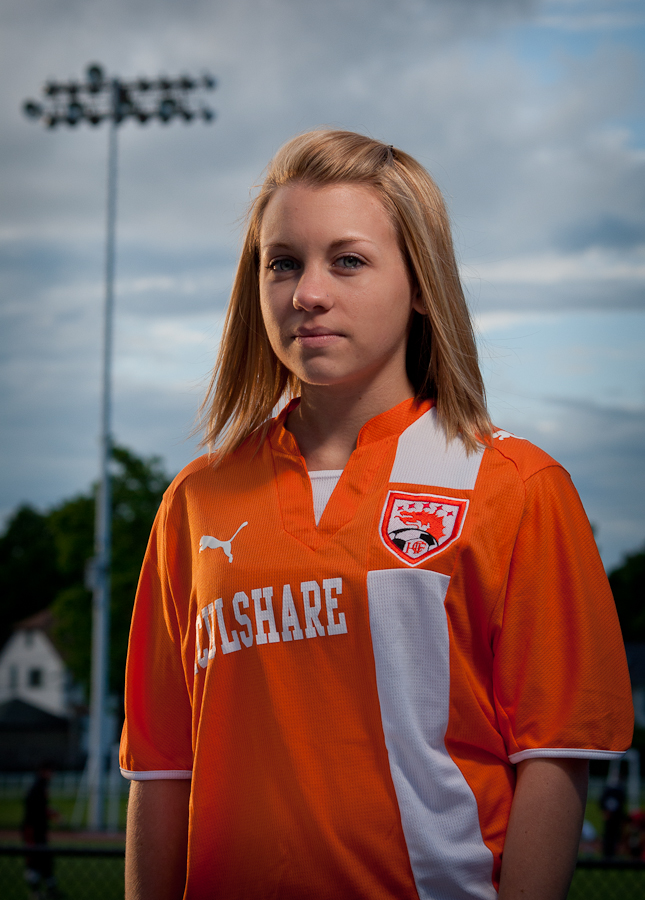 In a recent post about shooting a local, semi-pro soccer game to help promote the Worcester Hydra soccer club, I mentioned that I had a lot of fun and learned a bunch along the way about shooting sports and my camera's, errrr, capabilities. But that wasn't the main reason I was there with my camera gear.

I had offered to help my friend Corwyn begin the process of photographing some of the team's merchandise to help them (hopefully) sell some. We were able to squeeze in a few minutes before the game started with an intern from the team who was kind enough to don the team's home jersey for a quick portrait session beside the bleachers.

I knew we'd have preciously little time, so I Google-mapped the soccer stadium using this NOAA Solar Calculator to overlay which direction the sun would be coming from and determine where potential shady areas would be. This way, I could choose an angle which put her in the shade (so I could light her with flash) and the field in the background (to give it some context).

Exposing for the sky (and then underexposing a stop or so) gave me the somewhat dramatic look I wanted in the sky/clouds and, since she was in the shade, left her nice and dark. This allowed me to bring her back up with flash from a more flattering direction. As a bonus, the sun was sneaking past edge of the bleachers and lighting her a little on the camera-left side, so I went with that and brightened it a bit with a sun-colored flash as a rim light.

A few minutes later, I was on the sidelines trying not to get taken out by an errant soccer ball!