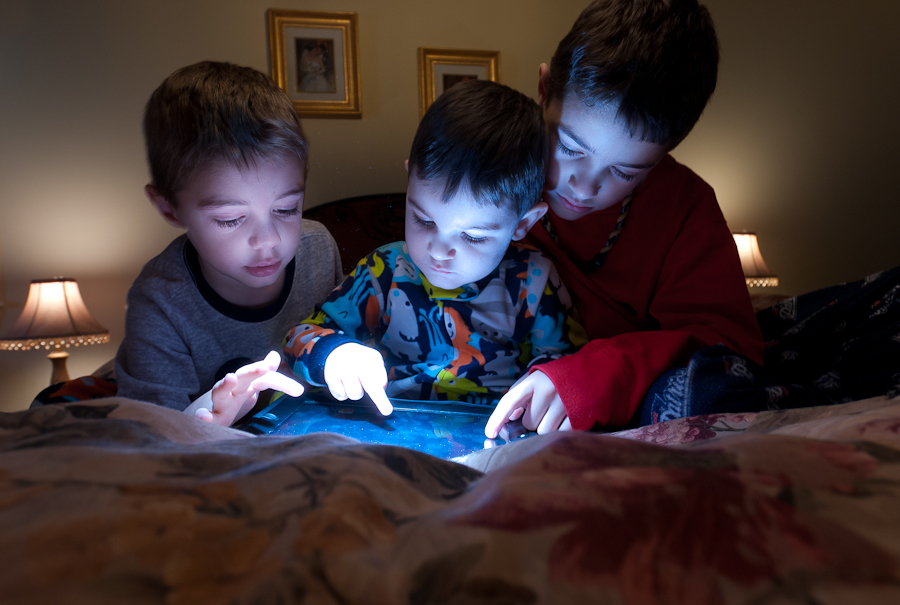 I love that with the firehose of free info on the web, photography for me went from something that just happened when I pushed the button to problem-identifying & problem-solving to make whatever kind of photo I want. I imagine that is what this generation of kids will experience as they go through school - after someone has explained what an encyclopedia or "the library" is (or was).

Idea: Make a comfy, casual photo of these 3 playing around on an iPad.

Inspiration: This cool Annie Leibovitz shot of Keith Richards from The Stones.

Problems: I liked the lamps in the background, but when I exposed for them I gave myself all kinds of problems to solve. 1) The iPad was too dim to light their faces. 2) Their heads blended into the dark background. 3) The back wall was too dark where the picture frames are between the lamps.

Solutions: In reverse order: 3) One flash with a tungsten-colored gel aimed at the photos up on the back wall, dialed down to look natural. 2) I wanted a back/overhead light to softly light their heads/hair, but I didn't want it blasting all over the room ruining the mood. A gridded homemade beauty dish clamped to the crossbar of a background stand kit up above / behind their heads did the trick. 1) This took some trial and (lots of) errors, but eventually was solved with a healthy dose of inspiration from this shot and a handheld (by my wife) gridded flash just out of the frame above the iPad, blasting off of it and reflecting back on their faces. Their fingers catching the direct light from the flash was unfortunate but unavoidable.