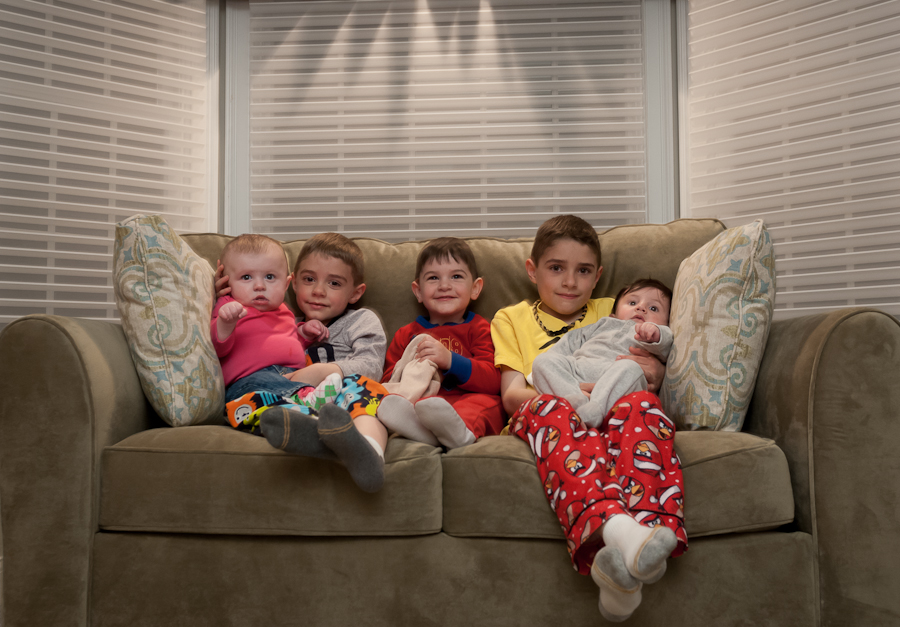 I try to find little opportunities where I can use a small bit of something or other I’ve learned to make a plain old snapshot a little more visually interesting.

This photo was not planned out really at all. Just the next generation of offspring from (part of the group of) my best friends from our youth. We wanted a quick photo of them together before we went our separate ways again for what is usually way too long an amount of time.

We stuck them on the couch in the fairly dark living room, which had just one ceiling light shining straight down on it/them. They were pretty dark (except the tops of their heads, which ended up helping things a bit as you’ll see in a sec), but I liked the light casting that funky shadow on the window blinds behind them.

In the dark room, even underexposing the scene a bit (~2 stops here) as I’ve come to like to do when using flash (to add some internal contrast) still left me in the “Hail Mary” range of shutter speeds, so I bumped the ISO up to 400 which got me 1/6th at f/4 – a balance between not too slow to hand-hold (I hoped) and not too wide open to carry focus if their faces didn’t all line up.

As a pleasant surprise, since most of the scene including their faces was very dark, the on-camera ceiling-bounce flash froze them which allowed me to use the pretty slow shutter with flash (known as “dragging the shutter”) to bring up the ambient light behind/above them. A little warming gel to match the flash color to the incandescent light bulb (shot on tungsten WB) and Bob’s your Uncle!

Actually, Bob’s my father, which is 50% of how I started down the road to find myself in the original version of such an awesome group of friends to begin with.